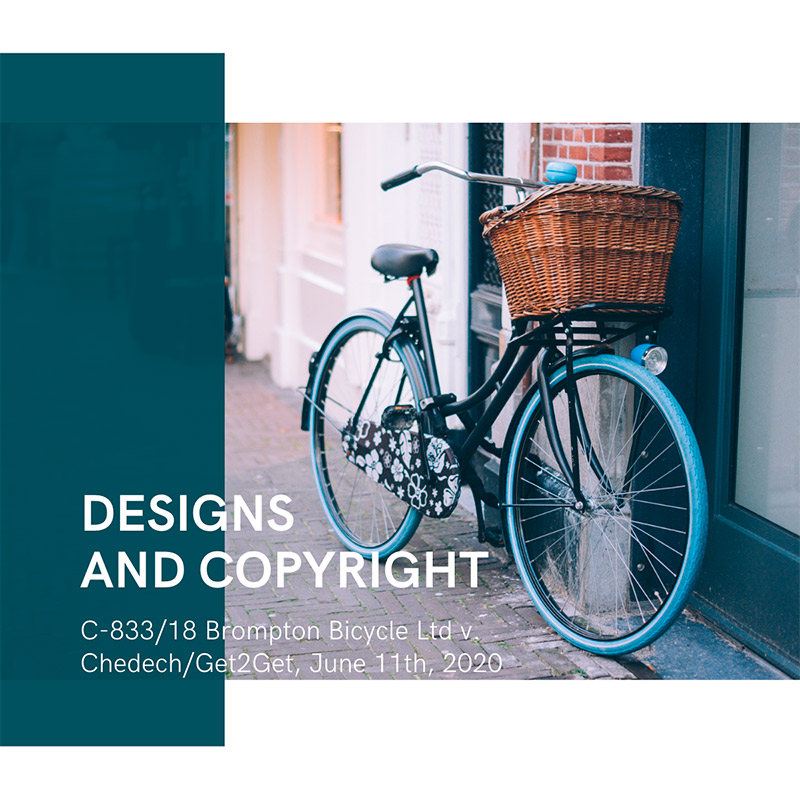 What happens if we design a revolutionary innovative bicycle? A bicycle that can adopt three different positions, i.e., the common position of bicycles for use or unfolded position, as opposed to a position that allows the bicycle to be folded, as well as an intermediate position so that the bicycle remains balanced on the ground. This is the Brompton bicycle, initially protected by a patent, at the end of which copyright protection was claimed against the company Get2Get, which marketed the Chedech bicycle, adopting the same three positions and a visual appearance very similar to that of the Brompton bicycle.

In its defence, Get2Get raised the functional character of the shape as well as the theory of multiplicity of shapes according to which the fact that there were other shapes or ways of obtaining the same result would exclude the copyright protection claimed by the owner of the Brompton bicycle.

In response to this question, the Court of Justice of the European Union recalls the concept of "work", referring to an original object that constitutes an intellectual creation of its author and, in turn, the expression of that creation (in accordance with the judgment of the CJEU of 12th September 2019, Case C-683/17, Cofemel, paragraph 29). The Cofemel judgment emphasises that the object will be considered original insofar as it "reflects the personality of its author, manifesting his free and creative choices" (paragraph 30), which also "necessarily implies the existence of an object identifiable with sufficient precision and objectivity" (paragraph 32).

It was on the basis of that definition that the CJEU considered that the Brompton bicycle qualified as a work for the purposes of copyright protection because, although the shape of the bicycle is necessary to obtain a technical result (the adoption of three different positions, one of which allows the bicycle to remain balanced on the ground), it expresses the creative capacity of its author by means of free and creative decisions that reflect his personality in an original manner. It refused to take as relevant factors the existence of other possible shapes allowing the same technical result to be obtained or the will of the alleged infringer, while the effectiveness of the shape in reaching the same technical result and the existence of an expired patent should only be considered insofar as they show why the shape was chosen.

The Court thus confirmed in its judgment the copyright protection of those products whose form is necessary to obtain a technical result, at least in part, while that product constitutes an original work in the terms set out above.

This was also declared by the Barcelona Appeal Court (Audiencia Provincial de Barcelona), in its ruling of 6th March 2020, 15th Section, when judging the alleged copyright protection of a streetlamp called "Latina" whose design "allows a dialogue to be established between the cranes of the boats, permanently moored in the port, and the lamps installed on the quays".

Although it is possible that the triangular arrangement adopted by the streetlamp derives from some technical function (not alleged in the proceedings) and is also subject to design protection, the Court confirmed that it deserved copyright protection. It is an original work as long as it is a streetlamp whose design and conception differ notably from other streetlamps used for urban lighting, with the author's creative aspects predominating over the functional ones.
Privacy Policy | Cookies Policy | Legal Notice